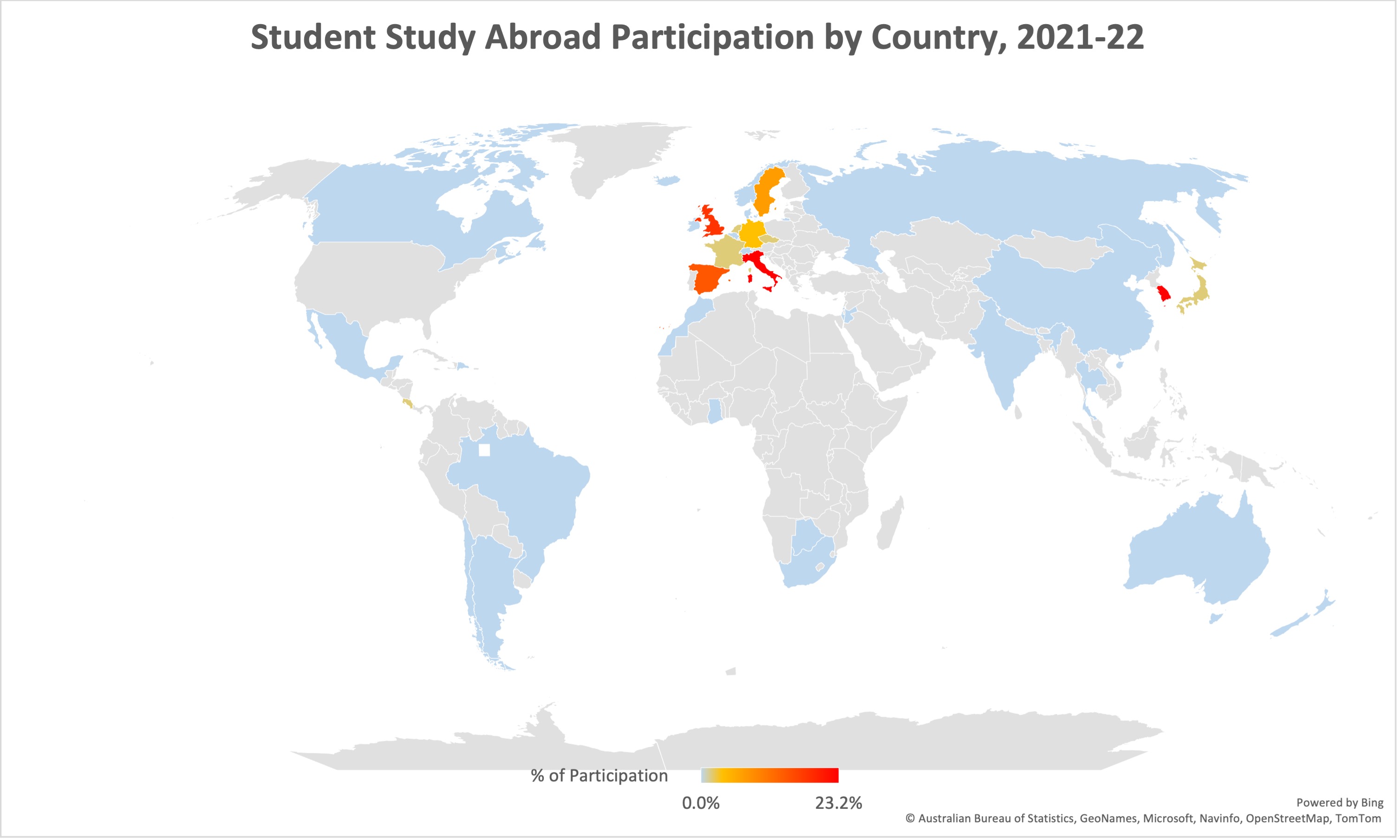 Where did UC Merced students prefer to study abroad throughout 2021-22? The UK usually tops the list, but how did it fare this year?

Last week, we let you know which were the top study abroad programs in 2021-22. And in August, we anticipate releasing the study abroad deadlines for 2023-24 programs.

UC Merced students have studied in more than three dozen countries historically but, coming out of the pandemic, students were artificially restricted to a narrower set of countries, whether because of limited healthcare infrastructure, political challenges, or the fact that certain countries' borders remained closed. Students concentrated heavily in Europe, East Asia, and a few outliers elsewhere in 2021-22.

Creative Korea has been a hot study abroad destination for nearly a decade and pushes out the United Kingdom for the top spot in 2021-22. UC partnerships with Korea's top three universities—Seoul National University, Korea University, and Yonsei University—propel student domand in the bustling capital. The robust partnerships offer a comprehensive slate of academic offerings to support nearly every major on our campus while giving students better access to K-pop, K-drama, and all things Korean.

We love just about everything made in Italy: pizza, pasta, fashion, and artisanal items. Bucking the national trend of a mere #2 ranking for American students nationwide or #3 UC-wide, Italy shares the top spot with South Korea for 2021-22. Chalk it up to a variety of programs, new programs with coursework in English, and an enduring interest in all things Italy, and you have a top study abroad destination. Social sciences and humanities students have a pick of interesting themed programs, but more coursework is available each year in STEM fields from biology to management and business economics.

Home of amazing moments, the perennial favorite among not only UC Merced students but US students in general, the United Kingdom has slipped to the #3 spot for 2021-22. Why? It's hard to say for sure. The UK has quite a bit going for it: coursework entirely in English, the appeal of a seemingly traditional exchange student experience, some of the best universities in the world including UC parters the University of Oxford and the University of Cambridge. The UK continues to be a good fit for nearly every major on campus and remains widely accessible.

Get to know #SpainInDetail. Always a top 10 country among UC Merced students, Spain has traditionally been the #2 destination across the University of California, but usually lower among our students. Among its appealing factors are Spanish and this sense of getting to linguistic or cultural roots for many students. Barcelona and Madrid draw students year after year with coursework across most UC Merced majors and increasingly more in English instead of Spanish.

Beautiful Sweden may seem like a dark horse, but the country draws new students every year. A solid, top-ranked Lund University, positive student experience feedback, coursework in English, and occasionally Norse history and mythology have all drawn UC Merced students. Students often cite the student life experience and the sense of community as why they thrive in Sweden. Academically, students have found success across humanities, social sciences, natural sciences, and select areas of engineering in Sweden.

It's never possible to know precisely why certain countries rise to the top, but here are some of our guesses:

Ready to apply? Head over to the MyStudyAbroad Portal to begin your find your progam and being your application today.